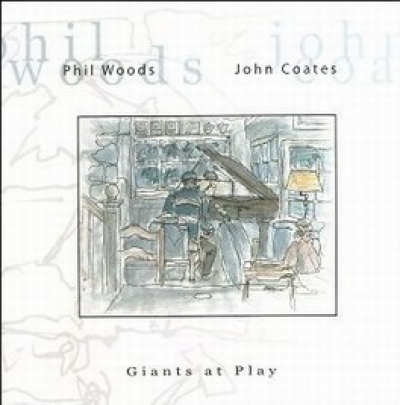 2 Much Too Much Phil Woods feat: John Coates

4 How Can We Be Wrong Phil Woods feat: John Coates

5 Starting From the Back Phil Woods feat: John Coates

Phil Woods has made so many outstanding recordings that critics can struggle to find new words of praise, but this duo date, recorded in Woods ' home with pianist John Coates , ranks with the best of them. The incredibly warm, intimate sound makes it seem like one is attending an informal meeting between two old friends, which of course the two musicians are, having worked together on two earlier releases for Omnisound in the 1970s. Woods never coasts, always finding something new within any piece, whether playing it for the first time or the thousandth; his always-emotional solos seem to sing to the listener. Coates , who isn't as well known because of his infrequent touring and recording, should surprise those not familiar with him and delight those who remember his earlier works. Coates takes a very fresh approach to "Embraceable You," giving it a sort of loping country flavor, as Woods ' matchless alto sax swings mightily. The pianist also sets the table beautifully for Woods with a breathtaking solo introduction to the infrequently heard ballad "An Affair to Remember." The pianist also contributed three fine originals to the session. Woods switches to clarinet (an instrument on which he excels, but never plays often enough) for another lost treasure, "How Can We Be Wrong." The finale opens with yet another memorable solo by Coates , as they wrap with an easygoing treatment of the old chestnut "Cherokee." This is one of many highly recommended releases to come from Eric Doney 's small but essential Pacific ST label. ~ Ken Dryden, All Music Guide