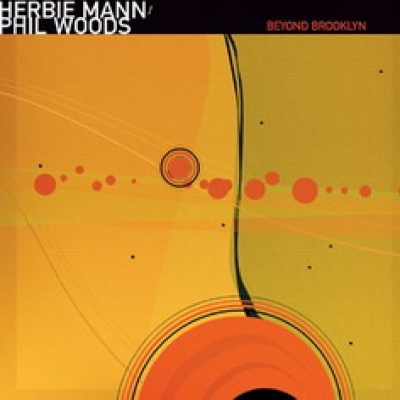 This beautiful MCG/Telarc records release is dedicated to the spirit and music of Herbie Mann. The Manchester Craftsmen's Guild is an arts and mentoring school for inner city youth in Pittsburgh, PA.

“Beyond Brooklyn , a tour de force of musicianship, creativity and heart, is a fitting memorial to Herbie Mann, the jazz flute master who passed away last year. The first collaboration in nearly half a century between Mann and saxophonist Woods, it unites their eclectic tastes, their versatility and their combination of joy and nothing-to-prove confidence.” ****   Newark Star-Ledger

“Herbie Mann's arrangement of Bill Evan's ‘We Will Meet Again' sets the tone for Mann's final recording. It is cool and sophisticated, carefree as a European vacation yet full of blue yearning. The echoes of bop in Phil Wood's arrangement of Oscar Pettiford's ‘Bohemia After Dark' add just the right amount of swing.”  A- Seattle Post-Intelligencer

“The results are delightful, with some bop standards, a few Latin tunes, and some basic originals comprising the program. The instrumentation changes from track to track, with two different rhythm sections being used and guest appearances from Gil Goldstein on accordion and trombonist Jay Ashby. Mann, who spontaneously recorded the closing ‘Time After Time' at a slightly later date when he was already seriously ill, sounds in prime form throughout this happy set. His final musical chapter is well worth savoring.”  All Music Guide

“Dedicated to the spirit and music of flutist Herbie Mann, who died in 2003, Beyond Brooklyn documents a meeting of Mann and alto saxophonist Phil Woods more than 50 years after they first played together. Both mellowed through the years, with Mann's flute growing more lyrical and less piping and Woods's alto becoming warmer. The results are consistently engaging, a deeply involving dialogue on a half-century of jazz experience. It's a CD of exalted moments: Mann is wonderfully airy on Randy Weston's ‘Little Niles,' Woods sweetly liquid on clarinet on Duke Ellington's ‘Azure' and lush yet keening on Billy Strayhorn's ‘Blood Count.'” Amazon.com

“Beyond Brooklyn is a classic of its kind. Highly recommended.”  JazzReview.com

“An album of class and style from two of jazz's greatest musicians who represent more than 100 years of collective performing experience.”  EuroClubdeJazz.com

“From Strayhorn/Ellington to Jobim to pop standards, these two old pros with an association going back 50 years serve it all up in fine style. Tasty work, a backing crew right in synch and a vibe that just won't quit, that's what you get here. A fine, straight ahead work that honors both key players in grand style.”  Midwest Record Recap

“This set, with these two masters, is classic, every tune a highlight. Absolutely gorgeous!”  Turbula.net